Hey all – I’ve been a busy bee in the kitchen lately trying new some recipes and whipping up some of my favorites. Nothing original, just scouring the web and tweaking where necessary. I thought I’d share and hopefully inspire you to get your booty off the couch and in the kitchen!

Ina Garten’s Roasted Tomato Basil Soup – Great for summer because you can eat it cold.  In a few months enjoy a happy winter weekend by eating it warm with a grilled cheese sandwich. Yum. My tweaks: use half the salt it calls for (Ina Garten if you’re reading this, your cardiologist called, stop using so much salt) and use low sodium chicken stock. Slightly annoying that you have to run this through a food mill. If you don’t have one you could get around that step by removing the tomato skins after you roast them and then running the soup through a blender for a few seconds. You won’t get quite the same consistency, but it would be ok in a pinch.

Ina Garten’s Chicken Salad Veronique – This is chicken salad jazzed up with green grapes and tarragon. I typically don’t like tarragon because it has an anise (licorice) flavor, but it really works here. Again, go easy on the salt. This salad is great on a crispy ciabatta bread.

Giada De Laurentiis’s Baked Penne with Roasted Vegetable – This was surprisingly SO good. The recipe calls for two zucchini and two squash but just use two squash (unless they are freakishly small). There was no way four would have fit in the pan. I didn’t have the dried Italian herb mix it called for – actually that’s not true, I found a jar of it that expired in 2008 – so I just made my own. I combined dried thyme, rosemary and oregano and it was fine. I also used plain mozzarella instead of smoked.

Ina Garten’s Tabbouleh Salad – I made this for the first time about a month ago and I’ve made it four times already. I can’t get enough of it and it’s actually healthy. Great on its own but even better in a warmed up pita. When I saw Ina G make it on her show, she used chicken stock instead of water so that’s what I did the first time. Never again. The chicken flavor was a terrible match for the lemon, herb and vegetable flavors. Since then I just do what the original recipe says and use boiling water. Aside from a little bit of olive oil, there is no fat because it’s just herbs, veggies, and wheat bulgur (very healthy grain that has the consistency of couscous). I also like to add a little avocado just before serving. That negates the no fat thing but come on, it’s avocado!

And of course you can’t forget dessert… Ina Garten’s Peach and Blueberry Crumbles – so good and perfect for summer because you can use up those peaches.  I will definitely tweak this for fall and winter with other fruits (pear and apple?). This one I actually got around to taking a picture of before I put it in the oven but I was so overwhelmed by the delicious smells coming from the kitchen that I forgot to snap a picture of the finished product. Let’s just say it was bubbling and delicious looking. I also did not have the small ramekins that the recipe called for so I made four LARGE crumbles instead of six reasonable portions. I had no trouble finishing the larger one 🙂 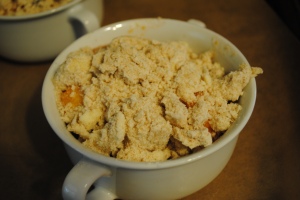