Ok, so I just finished the third installment in the Millennium series, The Girl Who Kicked the Hornet’s Nest. Oy. I have very mixed feelings. Before I describe my feelings, I will give my rating: 3 out of 5. 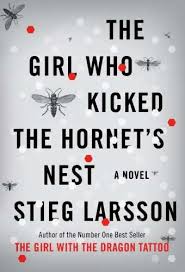 I know the author tragically died before the books were published, so I feel a little guilty saying this, but he is probably the worst judge of women’s thoughts and behaviors I’ve ever encountered. While the books purport themselves to be feminist, they’re not. Just because several men are vilified, doesn’t make the books feminist. Any heroines in the book are either bisexual or swingers. Now, I love bisexuals! Swingers are lovely! But I found it insulting that the only way a woman could be deemed strong or independent was to fit into one of those categories. He pretty much implied that monogamy means you’re weak and submissive.  And the way every single woman fawns over the leading male? ENOUGH!

I also found that I was actually skipping past pages that were just so unnecessary and dry. Ugh. If I hadn’t been so invested in the characters from the previous two books, I probably would have rated it a 2. So there.

Next up is Carlos Ruiz Zafon’s The Angel’s Game. It was decent, I’ll give it 3.5 out of 5. One thing is for sure, I definitely want to visit Barcelona. The book makes it sound beautiful and mysterious and wonderful. There were some interesting twists and turns, a few gasps, and several dozen eye rolls, but I enjoyed it.

The book club at my job is discussing it in September so I may have more to say then. I’m very curious to see what my coworkers thought about it.

Now onto what I’m reading. I just started Kathryn Stockett’s The Help. So far, so good!

Twenty-two-year-old Skeeter has just returned home after graduating from Ole Miss. She may have a degree, but it is 1962, Mississippi, and her mother will not be happy till Skeeter has a ring on her finger. Skeeter would normally find solace with her beloved maid Constantine, the woman who raised her, but Constantine has disappeared and no one will tell Skeeter where she has gone.

Aibileen is a black maid, a wise, regal woman raising her seventeenth white child. Something has shifted inside her after the loss of her own son, who died while his bosses looked the other way. She is devoted to the little girl she looks after, though she knows both their hearts may be broken.

Minny, Aibileen’s best friend, is short, fat, and perhaps the sassiest woman in Mississippi. She can cook like nobody’s business, but she can’t mind her tongue, so she’s lost yet another job. Minny finally finds a position working for someone too new to town to know her reputation. But her new boss has secrets of her own.

Seemingly as different from one another as can be, these women will nonetheless come together for a clandestine project that will put them all at risk. And why? Because they are suffocating within the lines that define their town and their times. And sometimes lines are made to be crossed.