Last week I made an heirloom tomato salad that was fresh and cool and wonderful. Whole Foods happened to have heirloom tomatoes and they just look so damn fancy that I had to buy a few. I came home and did some googling and came across this recipe on Epicurious. It was featured in Gourmet a few years ago and was very quick and easy. I agree with some of the commenters who indicated that there was too much vinaigrette. While I definitely didn’t use the five pounds of tomatoes that the recipe called for, I still think I would reduce the dressing so it’s not too soupy. I halved the recipe and still found that I had too much. The amounts below are the halved amounts. 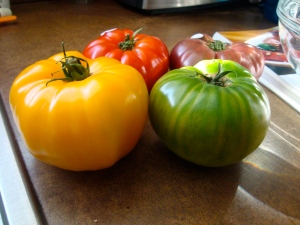 Ingredients for 4-6 side servings

Cut the tomatoes into small-ish pieces and put in a large bowl. You can discard some of the seedy soup if it’s too liquidy.

In a small bowl combine the mustard, vinegar, sugar, salt, and  pepper. Slowly add the olive oil while quickly whisking. Whisk until the dressing comes together.

Add the vinaigrette (start with half) to the tomatoes along with the basil and mozzarella. Toss to combine and taste for seasoning. Let the salad sit for at least ten minutes to let the flavors blend. This does NOT keep well overnight so don’t make it too far ahead of time.