In the summer of 2008, I attended an event at Loaves and Fishes Cookshop in Garden City. I dragged my mom with me to see Katie Lee Joel demonstrate a few recipes from her new book, The Comfort Table.

The book is beautiful and nicely organized.  I have found a few mistakes (timing, measurements that don’t add up) but it’s her first book and stuff happens. Pictures of KLJ appear throughout, and she looks gorgeous in pretty much all of them. It’s kind of like how Giada Delaurentis and her boobs are on each page of Everyday Italian.  KLJ opted to leave the boobs at home and I appreciate that.
I saw KLJ and her famous hubby (now ex) on Oprah last year, and while I tried not to like her, she used her West Virginia niceties and I was done for. She is just the sweetest, cutest thing.  Yes, she is only a year older than I am, and yes, her then husband is more than a decade older than my father, but these are just minor details! Nuggets of silly information!
She made braised pork chops and I really enjoyed them. I’ve made them a few times since, and with a few minor adjustments it’s a very easy and tasty recipe. 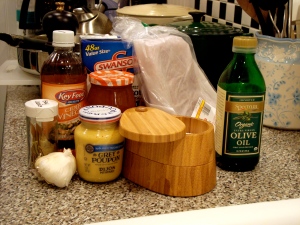 Your ingredients:
4 boneless center-cut pork chops
2 teaspoons dijon mustard
kosher salt
fresh pepper
garlic
1 bay leaf
1 tablespoon cider vinegar
1 cup low sodium chicken stock
olive oil
1/2 cup apricot jam (preserves)
Matt and I were happy each having one pork chop with a veggie side dish but a hungry fella (or lady) would probably eat two so if you want to make more than 4, just double the other ingredients so you have enough sauce.

Season both sides of the pork chops with lots of salt and pepper. Heat 2 tablespoons of olive oil in a large pan over medium heat. Brown the pork chops for about 4 minutes on each side. I use my favorite tongs for jobs like this.

I think it’s neat that you can actually watch the meat cook. Obviously I have no life. After the eight minutes of browning, the meat will not be cooked throughout but that’s ok because you’re going to braise it. Braising means cooking in liquid.

While the meat is browning, whisk together 1 cup of chicken broth, 2 teaspoons of dijon mustard, 1/2 cup of apricot jam, and 1 tablespoon of cider vinegar.

See how they’re not really that brown? Just pretend they are. Once the chops are browned, remove them and set aside on a plate. 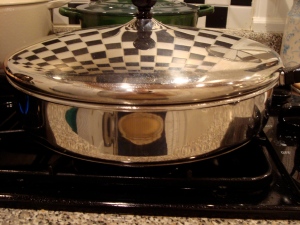 Add the liquid to the pan along with 1 bay leaf and 2 smashed cloves of garlic. Scrape the bottom of the pan with a wooden spoon to get all the little brown bits into your sauce. Bring that to a boil and then lower the heat and return the pork to the pan. Cover and cook for five minutes.

Once the pork is cooked throughout, set them aside and cover with foil to keep them warm. You can also throw out the garlic and bay leaf.  Raise the heat and boil the liquid until it becomes a thick-ish glaze. This usually takes between 5 and 10 minutes. 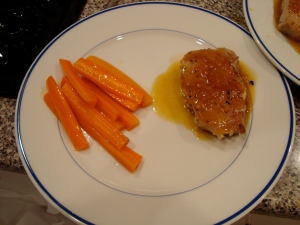 Spoon the apricot glaze over the pork chops and enjoy! I served them with glazed carrots but they would be damn good with some mashed potatoes.